“creating something—knowledge formation, a sharing, language. In the
movement of sound, the making of an exchange is enacted; a place
is generated by the temporality of the auditory.  Auditory knowledge is a radical
epistemological thrust that unfolds as a spatio-temporal event: sound
opens up a field of interaction, to become a channel, a fluid, a flux of
voice and urgency, of play and drama, of mutuality and sharing, to
ultimately carve out a micro-geography of the moment, while always
already disappearing, as a distributive and sensitive propagation”

” Often sound is what lends to directing our visual focus—we hear something and
this tells us where to look; it eases around us in a flow of energy to
which we unconsciously respond. Sounds are associated with their
original source, while also becoming their own thing, separate and
constantly blending with other sounds, thereby continually moving in
and out of focus and clarity.”

I just wanted to document some of these opening quotes i’ve taken from Brandon LaBelle’s Acoustic Territiories, a book i’ve recently come into contact with. I’d like to pick up on an area within the book that discusses the acoustic space of the home. “Exposed to the challenges of city life, to the tensions of so many underground experiences, of the disorienting echo, the home can be appreciated as a counter-balance to the dynamics of exposure. The experience of coming home gives us comfort and reprieve from the demands of the exterior world. To pull off the shoes, make a tea, and sit back on the sofa defines the home as a soft space for quiet moments and relaxing comfort. It is where we sleep, falling into the softness of bed and the tiny sounds of the night outside.” Involuntarily the materials we are using now have obvious ties to the home, that as i’ve said in previous posts, such objects do not loose there subjectivity – but rather there form and there vibration become integral to a new temporal assemblage, The teacup is still a teacup, that doesn’t change, meaning it does not loose its object orientation. ” The home is an emotional space balanced on orderly refinement, from the chair one sits in  every evening to the favourite cup. It promises that all things find their place, and relations stabilize around a set of shared values, rituals, and performances— “. Interior life and the development of the private within Western society run parallel to the evolution of neoliberal domestic space, as a refined sphere of the immediate family. “The production of the home is intimately linked to the bourgeois conception of privacy, interweaving
middle-class affluence with a steady withdrawal from the full complexity and intermixing of everyday experiences.” To me these objects cannot be disconnected from there ritual functions within the home, to engage with them on this curious level is the act of performance – what is different here within this video is the absence of the human body. The audio composition happening appears alive with activity, the electronic fan manipulates air around the space, interrupting the rhythmic opposing forces of the vibrating motor and the object – spaces open up between individual sounds, which seems to introduce an level of chance within the composition, only to go as far as the structure will allow. Unlike an improvised performative setting, the spaces that open up can only go so far toward a escaping of its own restraint as such, within the performative space, such gaps can become directions to move into new territory. Not that such restraint or conditions are negative, arguably they are necessary to grasp a direction at all. They are simply aspects one considers when approaching these objects differently, while considering the knowledge of the sounds and seemingly continuous possibilities of new forms.

To pick back up on LaBelles comments on the acoustic territories of the home, he alludes to the domestic space becoming a haven refined through object
collecting, interior design, furnishing, and a general spatial ordering that
might renew a feeling for the material world. As Charles Rice suggests, “Objects
as commodities could be wrenched from circulation, freed from the
drudgery of being ‘useful,’ becoming embedded in the interior to
produce a conscious, ‘new nature’ of domesticity.” What then does it mean to explore a domestic object as a source for sound production? This I am still learning – Within performance where both me, Auguste and Jasper are playing there is naturally more activity, meaning the array of sounds collides as layered noise… 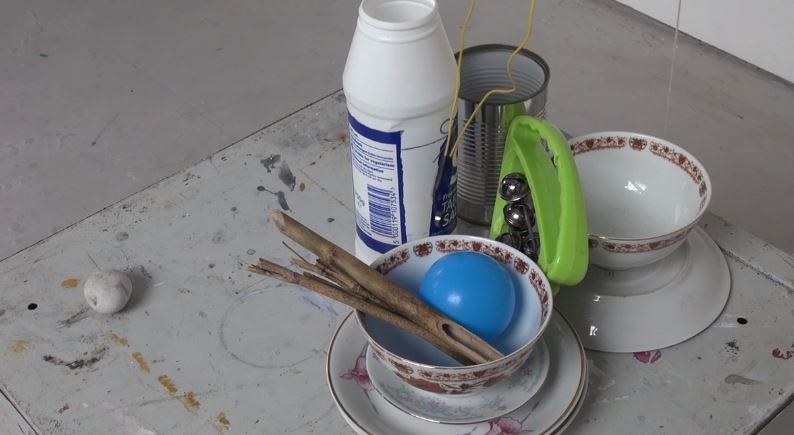