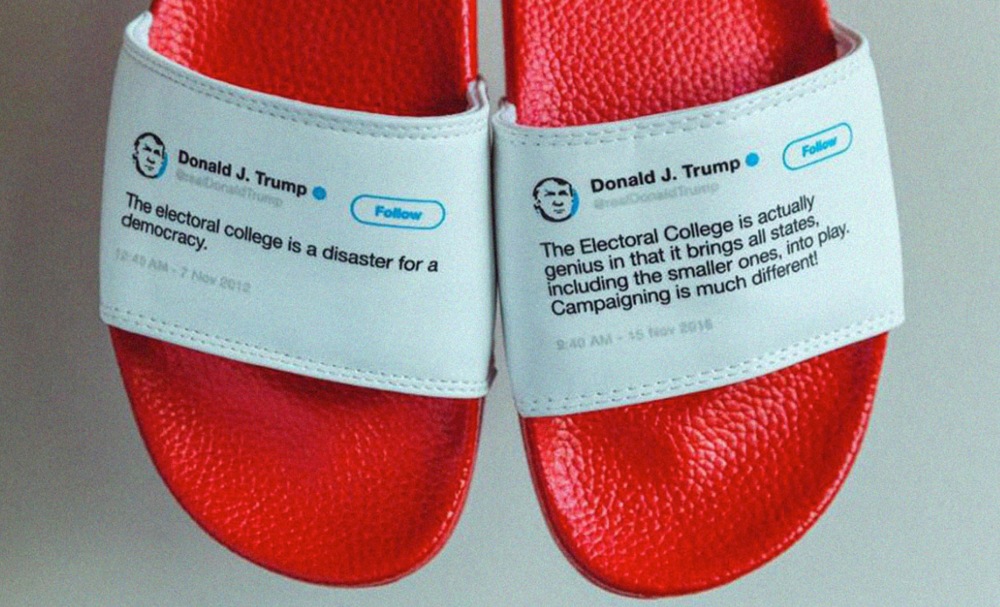 A lighthearted poke at the political flip-flops Trump makes on Twitter, as sold on http://www.presidentflipflops.com

Today’s GOMO performance -One thing abundantly clear was it really didn’t feel like we had made the most of this change in environment, setting up as we have been in the studio, didn’t seem to translate in the life drawing room. This room has all the character of traditional an art school building, easels and industrial heaters litter the outskirts of the room. I guess i didn’t really consider how the space(our studio) was informing the work. If we had longer XLR cables it would have been have perhaps meant that we could have scattered the speakers which in hindsight would have been cool. But we really couldn’t open up the circle of speakers all that much, which meant that it quickly became pointless to have the 360 sound when only me and goose could really experience it – I think now knowing this, until we can get our hands on longer cables, that performance doesn’t seem worth the effort of transporting all the equipment for. This was a factor that contributed to a feeling of not really being into it and feeling kinda bored – which i think both me and Goose shared.

Inconsistency, is something I’ve been thinking about quite a bit, what it means to be inconsistent as an artist; today we had the opportunity to be inconsistent but choose to do what we knew? Why was this? it wasn’t as if it was a conscious decision to do so – we just kinda did? it seems a shame to have not grasped the opportunity to really experiment. Me and Goose prior to this had spoken with Gillian about the performativity of this project – Gillian spoke about the time that we performed at the second year show, setting up in front of everyone, pulling all the equipment out from hidden places in the space. Really considering how the room might be influencing the performance, not good or bad, but – easy or difficult, complimentary or brutal?

Consistency means to not follow your own behavioural trends, Consistency is often dominant as it works in favour of an institution much like the university i sit in right now, its easier to understand and predict a persons actions when you know here tendencies. So then, in contrast to this, its interesting to think about what it means to be inconsistent. I think what i’m getting at here is i’d like 700ok to not be something that can be easily defined into a category- the idea that if you come along to a performance of ours, there’s no real telling what we might do. I think above and beyond that it keeps it exciting for use, which may translate, but it leans towards an artwork that is less concerned with being squicky clean, in favour of the dirty and inconsistent.

The discussion after was a helpful time to talk through with the other performers in the group exactly what we thought and felt during and after the event, often these conversation are where the realisations  happen, when you can here from someone from the outside looking in on your weird little performance bubble.

There were some interesting things said it regard to cross collaboration or lack of it for a better word. We may have been in the same room, but that was pretty much the exstent of the collaboration – which is sometimes fine, but here there was very little bleeding into one another, we all had our stations, that we didn’t leave – working on our own stuff that we were all fairly familiar with – which is kinda funny thinking about it now; We throw around some ideas about how we might mess with this dynamic while all agreeing that it was important that we do this again. Again the score was mentioned, and perhaps some dialogue – discussion at the beginning, outlining a rough plan or exchange of what one another is doing, explore the potential for merging, harmoniously or noisey?

So i’m looking forward to the next one, we already have idea that we might try out.